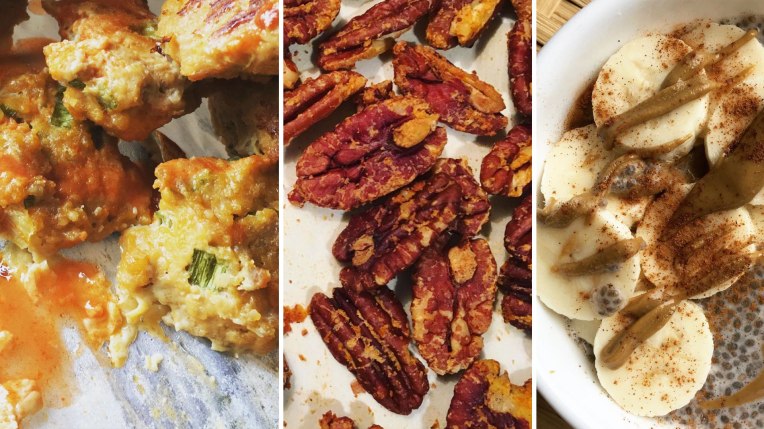 Well, that title just about says it all.

When I agreed to start Whole30 in January, I didn’t quite think through the logistics of the 30 days. Turns out, it’s not a “wing-it-as-you-go” type of diet. I can’t stand having the same food multiple days in a row, and I have never been a 5-containers-with-grilled-chicken-and-broccoli kinda gal. So, I wanted to create my own little guide to Whole30 that includes some of the recipes, tips, and treats I’ve picked up that you should definitely know about.

I have never in my life used a food processor as much as I have the past thirty days. I used it to crush nuts + dates, to make mayonnaise, to make ketchup, to make ranch… you name it. Some of these things you could maybe use a blender for, but having a food processor around makes things MUCH easier.

I made this Buffalo Chicken Meatballs recipe three times, and it’s awesome. Frank’s Red Hot (sauce) is Whole30 approved, and you’ll find an excuse to use it on everything to add some flavor. I don’t even really like hot sauce. You’ll also want to make a batch of Whole30 ranch to dip them in (recipe below). Note: I swapped out the ground chicken in this recipe for ground turkey, and it was great.

Okay, okay. So cocoa + dates are banned. This is a rule I think is maybe a little silly…but, if you choose to stick to it, this easy recipe (compliments of Jade Maghoney!) will be a great after-dinner treat that will keep you sane. In fact, I ate it for dinner tonight. Coconut Cream (not to be confused with cream of coconut that you find in the cocktail aisle that definitely has sugar in it) is usually found in the “foreign foods” section of the grocery store and has a whipped cream-like texture. And, it’s not just good for sneaking a little non-dessert into your life. It doesn’t have a super strong flavor, so I actually threw a dollop in with some potatoes and whipped them into creamy mashed potatoes. So good!

Throw a handful (sorry y’all, I don’t quite measure) of cashews, a handful of almonds, 7 or 8 dates, and a little bit of water into a food processor and blend until it’s pretty fine. I also added some sunflower butter (you could use almond) to hold it together if needed. Press into a glass dish.

Spread coconut cream on top of base, and top with fresh fruit (I used strawberries). Refrigerate until firm – enjoy!

Making your own mayo will make life so much easier.

Turns out, mayonnaise is incredibly easy to make (and, it tastes just as good as the store-bought stuff). The ingredient that isn’t Whole30 approved in mayonnaise, for the most part, is soybean oil (since legumes are ix-nayed). I started with this recipe, and then adapted a little to fit, honestly, whatever ingredients I had remembered to buy at the time. Here’s what you’ll need:

1 egg
Dijon mustard (or mustard powder)
Half a lemon
Salt
About 1 1/4 cups of sunflower, avocado, or extra-light oil

So, a couple tricks here.
1 – Make sure to leave your egg on the counter so that it comes to room-temperature before you try to whip it into mayo. I don’t know the science behind this, but it was key to most of the mayo recipes I tried.
2 – No matter how much you like extra virgin olive oil (and, I do!) it DOES NOT taste good as a base for mayo. Your mayo will be bitter and you’ll have to throw it all in the trash. I used extra-light-tasting olive oil and sunflower oil, and both turned out great.
3 – To your food processor, add the egg, Dijon, salt, and about 1/4 cup of oil. Then, blend until it starts to look creamy. Using the removable part of your food processor (or, if you have a little one like me, the divot where you can pour things), slowly add the remaining oil while the food processor is still running. It should take 2 or 3 minutes for you to add it all. Squeeze in your lemon, and blend until it’s at the consistency you’d like.

I added this mayonnaise to my ranch (getting there, I know), egg salad, chicken salad, tuna salad, and my chicken meatballs, which made for easy lunches that didn’t feel like leftovers. It’s really nice to just have some on hand.

And, why deprive yourself of ranch?

Once you’ve got mayonnaise down, you have to try this ranch. Ranch on Whole30? What? Yes, friends. Eat ranch. I adapted my version from this recipe. I used 1 tsp. of each of these spices, and combined them in a Ziploc bag to have on-hand: salt, parsley, dill, chives, onion powder, dehydrated onion flakes, garlic powder, and pepper.

Mix a tablespoon of the dry ranch mix with 1 cup of your mayonnaise, 1/3 cup of unsweetened almond milk, and a squeeze of lemon (about 1 tablespoon).

Turns out that other condiments are also kinda easy to make.

Since you can now have white potatoes on Whole30 (cheers!) you should also have some ketchup to dip them taters in. Here’s the combo – you’ll have to just play around with the ratios because, unfortunately as I mentioned previously, I’m terrible at measuring:

You can also make a killer tomato sauce that works with spaghetti squash, zucchini, ground turkey, eggplant… go for it. You only need a few ingredients, and a handful of spices from the cupboard:

Start by sautéing the garlic in the oil, and then adding the rest of the ingredients into a pot. Crush the tomatoes with a fork or potato masher. Cook the sauce on low until combined.

Take it up. It’s not hard at all – cut a spaghetti squash in half, scoop out the seeds, drizzle it with olive oil, and sprinkle with salt and pepper. Roast on 350˚ for about 30-40 minutes, face up, until you can shred all the flesh (ew, Abigail, wording!) with a fork. I cook it on Sunday, and then keep it in the fridge as an easy dinner if I don’t have time to cook. Mix with a little of that homemade pasta sauce and some ground turkey, and you’ve got spaghetti [squash] with meat sauce.

Cook a bunch on Saturday and Sunday.

Okay, so here’s where you can combat the meal prep thing that I hate. The idea of having matching containers of meat and vegetables to be heated day after day gives me heartburn, genuinely. The best way to combat this while also not finding yourself eating almonds for dinner during the week is to make a list of foods you’d like to eat, and then making a handful of dishes to keep in the fridge. Not technically leftovers because you haven’t eaten them yet – and not the same thing over and over. Last week, this is what I prepped on Sunday:

Not bad for options, eh?

You can eat bacon!

Really! The Whole30 cookbook says to “read the labels” when it comes to bacon, and that you’ll probably need to order some specialty bacon online or go to your local butcher for fresh bacon to find something that qualifies, but I’ve got the secret for you – most “low-sodium” bacons are sugar-free! So, you likely can have the grocery store bacon you’re passing by anyway. The Publix Hickory Smoked Low-Sodium bacon is approved, as is the Smithfield Low-Sodium Bacon. Pick it up on BOGO! Eat bacon! This morning, I had eggs, bacon, hash browns, and a pear for breakfast. Whole30 doesn’t have to be gross.

I’ve roasted nuts every weekend now. The great thing about Whole30 is that you don’t have to be hungry, because you’re not counting calories. So, nuts are a great snack if you need a little afternoon fuel. If you’re not into the plain ol’ nut thing, like I’m not, then I want to encourage you to think outside salted almonds. This is one of my favorite combinations:

Mix pecans with a little olive oil, hot sauce, garlic powder, onion powder, salt, and onion flakes. Bake for about 12 minutes on 350˚, until your pecans are fragrant. This tastes like Chex Mix seasoning! So good!

Honestly – the most common question people have asked me about Whole30 is whether or not it’s hard. It isn’t easy, I will say, and the first few days, I had a constant sugar-withdrawal headache. But, come day 8 or 9, my body felt great. Now, on Day 28, I’m planning on carrying over a lot of these Whole30 tricks into my lifestyle. You DO have time to cook. You CAN make dinners work in 30 minutes without prepackaged foods. And, your body WILL feel so much better when you fill it with whole foods. Promise! Maybe I won’t be making my own ketchup, but I’ll definitely be thinking twice when it comes to mimosas (or, shoveling donuts) on the weekend. It’s totally worth it.

You can do it!